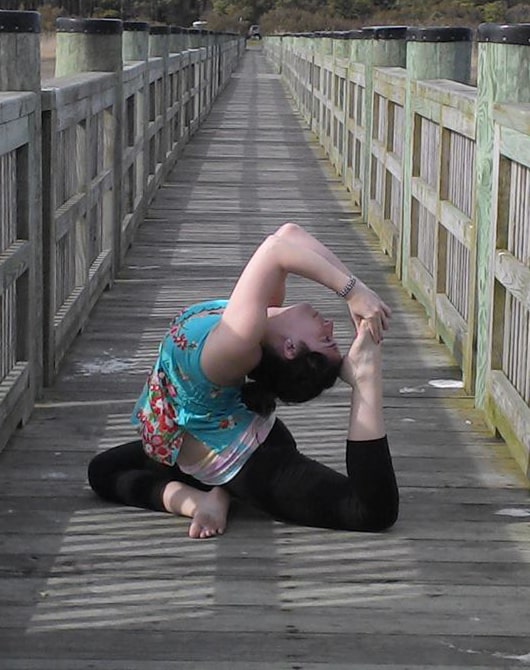 Stefania started her hot yoga practice in Brighton in 2010, and immediately fell in love with the Classic 26/2 series. Stefania is grateful for the gift of yoga and all of its physical, mental, and spiritual benefits. After practising at various studios across the globe, she attended the Fall 2013 teacher training in LA. Since then, she has managed several yoga businesses and taught at various international studios and retreat centres. Stefania loves to backbend, travel, and bake. 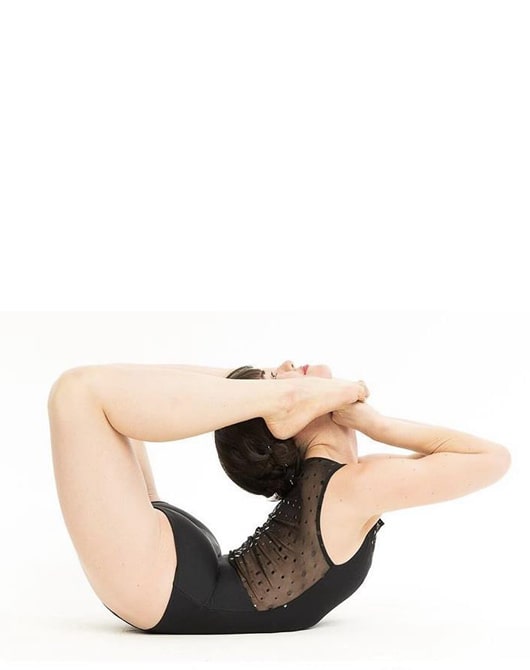 After the first Bikram yoga class, where Almania was wearing sweatpants and a long sleeve shirt and had to leave the room, thinking she would never go back in, Almania decided to try Bikram yoga again in the fall of 2010. Mainly she was trying to find a way to keep warm, since the heat wasn’t working properly in her apartment. After her first two weeks at the studio, someone convinced her to take part in the 30 days challenge. Once she finished the 30 days, she decided to double it and make it a 60 days challenge. As Bikram says: “Give me 60 days and I’ll change your life.” After six months of practice, Almania decided to go to teacher training and attended the Spring TT in LA. She has been happily practicing and traveling ever since and is grateful for the people she came across during this yoga journey. 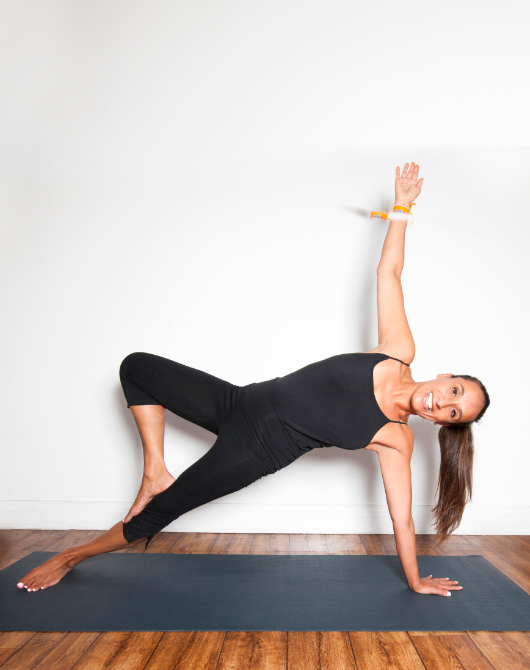 Debbie came to yoga after major surgery on her lower back over 12 years ago to aid the healing process and fell in love with every aspect of the practice and has never looked back. She travelled to Rishikesh in India a few years later to complete her teacher training.
Debbie combines two of her passions — teaching hatha yoga and travel. She loves teaching beginners and embracing more experienced practitioners to deepen their practice. Debbie brings her sense of fun and adventure to her classes; you will leave her class with your heart smiling. 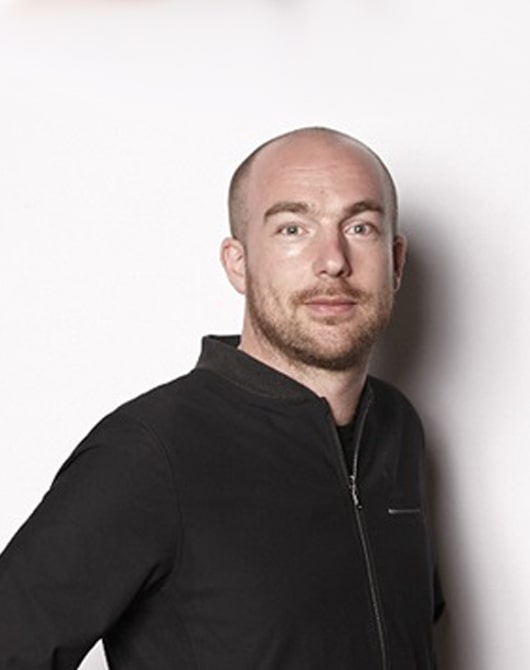 Way back in 2008, Rich read an article in a newspaper about hot yoga. Intrigued, he folded the paper, finished his tea and walked into a hot yoga studio. Then began a challenging, rewarding and joyful journey. Now he’s enjoyed sharing that journey and all he’s learnt through teaching. 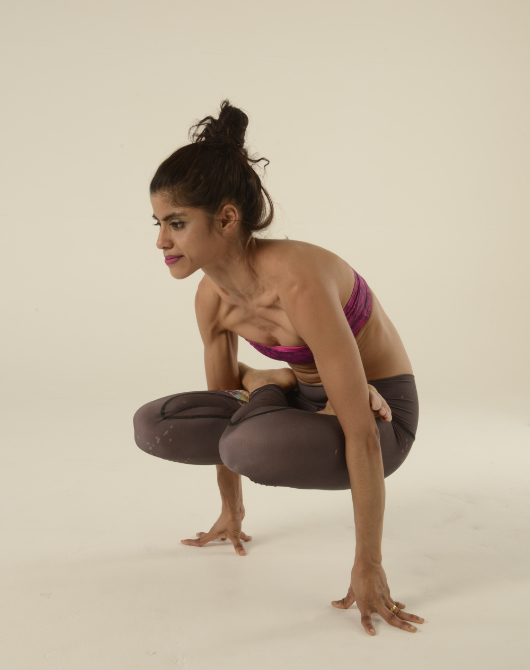 Sindy strongly believes if she can do yoga ANYONE can do yoga. After years of battering her body through high impact sports such as athletics and volleyball, physically she’d been through the mill. After surviving the 2004 tsunami, Sindy had suffered quite a lot of trauma in her body and mind. After messing around trying some “yoga moves” on a beach in Thailand a friend suggested she try it for real. It was the first time after years of anxiety problems that she felt a sense of calm, how her body changed was an added bonus. Sindy has been teaching Yoga full time since 2009 and also qualified as a personal trainer in 2015. She’s always looking to educate herself further so she can deepen her knowledge, stay connected and teach her students to the very best of her ability. In 2016 she completed Stewart Gilchrist’s 500hour teacher training with Yoga Alliance. Sindy welcomes all students to her class and asks them not to come with expectations but with an open mind and heart.

Ky is a dynamic and enthusiastic individual and his teaching skills have been responsible for a number of competitors in the top ten each year including 2009 men’s international champion Dev Kapil, 2012 and 2014 women’s international champion Gloria Suen as well as 2016 women’s champion Almania Colombo. Ky also serves as an international judge. He has judged championships all around the world and realises the importance of the championships and how much he has grown from the experience. Ky is dedicated and focused on using his expertise, knowledge and past experiences to help others achieve their goals through their own yoga practice. 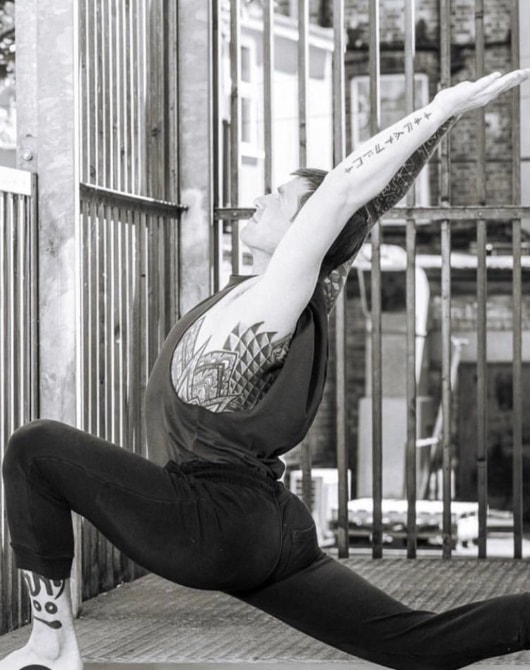 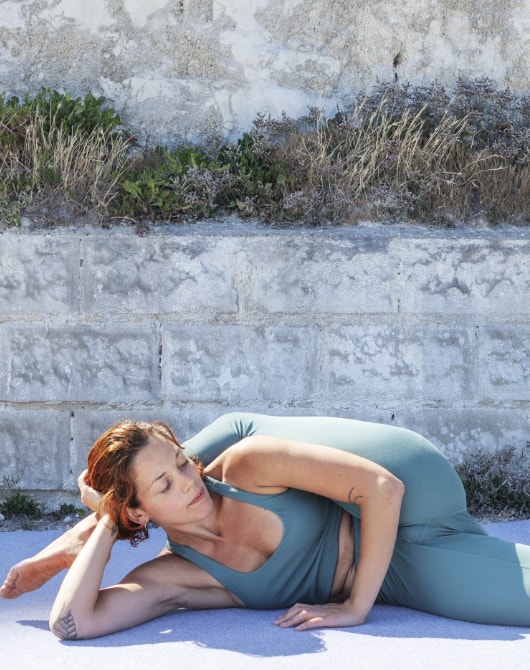 Sorcha’s classes are dynamic and playful, finding meditation and focus within a strong and intense practice. You will learn new variations, push your limits and enjoy falling over along the way.

With a grounding in Hot Yoga, it was in Mysore, India where Sorcha dramatically furthered her yoga training with Saraswathi Jois at Traditional Ashtanga Yoga Centre KPJAYI, falling in love with this intense meditation and asana practice. On her return to the UK, she continued at Ashtanga Yoga London. This strong discipline opened the way for her to immerse herself in other styles of yoga. She now regularly practices Dharma, Ashtanga Vinyasa, Rocket Vinyasa, Iyengar, and Hot Yoga, and enjoys benefits from all the styles. Most recently Sorcha has included Hand Balance into her training, a strong circus practice that she finds supports and improves her yoga and moving meditation.
Sorcha completed her 500 hour Teacher Training with Dharma Yoga New York in 2018.
To Sorcha, Yoga is fulfilling, nurturing, and transformational. She revels in its focus on alignment, the connection between breath and movement, it’s power to lift and heal, and it’s positive influence on everyday life.
Sorcha has a passion to pass on what she has gained from such a supportive and inclusive discipline, while continuing to learn and grow in her own practice and teaching. 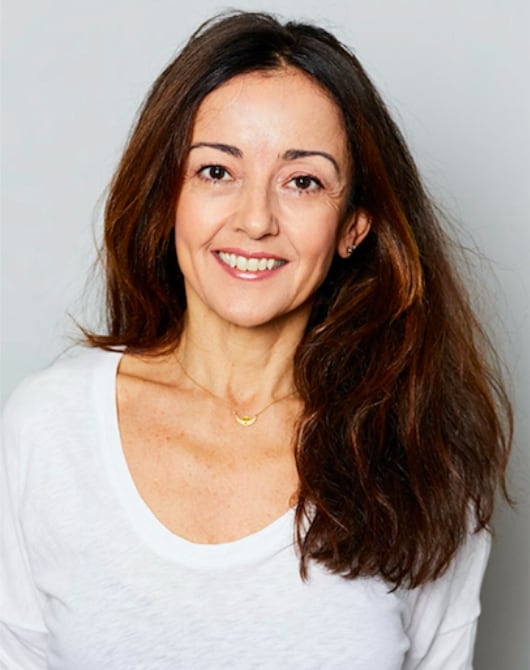 Antonia began practicing yoga in 1998. In 2001, she completed her first yoga teacher training in London with The British Wheel of Yoga.

In 2002, Antonia took her first Bikram Yoga class. She immediately felt the benefits of this healing practice. Soon after, she decided to attend the ” nine week 500-hour Bikram Yoga teacher training ” and became a certified instructor in Spring, 2003.

During her first year of teaching, Antonia taught in London. Later, she taught in Ibiza, at the first and newly opened Hot Yoga School.

In 2005, Antonia went to Los Angeles to study at Bikram Yoga Headquarters and to learn from the most senior teachers. She was a regular practitioner of the Advanced 84 yoga asanas. She learned directly from Bikram and Emmy Cleaves, the principal teacher.

Antonia was one of the few teachers authorized to lead the Advanced series class.

During her time in Los Angeles, she worked closely with Rajashree Choudhury, studying yoga therapy, prenatal and children’s yoga, all of which she is qualified to teach.

In addition, Antonia coordinated and assisted at worldwide yoga teacher trainings and seminars.

Antonia is passionate about practicing and teaching yoga to all levels and ages. She emphasizes alignment, focus, determination, breath and patience to maximize the many physical and mental benefits of a regular yoga practice. She is continuously inspired by the increased and overall sense of wellbeing, vitality and peace that she feels in herself and her students. 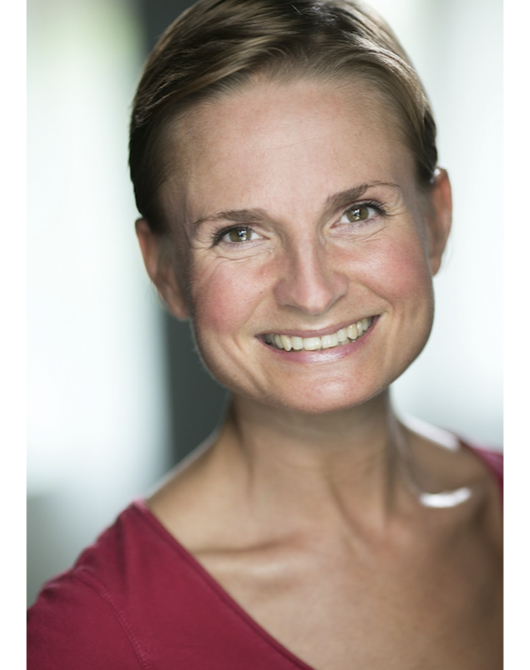 Sophie took her first Bikram class over 20 years ago and immediately knew it was for her. As a student she trained in Musical Theatre and now working as a performer Bikram was an excellent way to keep her body strong and flexible.
“Plus, wherever I’m working in the country or the world, there’s always a Bikram studio nearby to drop in and practice that magical sequence! Back in the day I was also a keen runner of marathons and Bikram was like therapy for preventing and recovering from stress inflicted on the body by pavement running.”

In 2014 Sophie decided to take her love of Bikram to the next level and attended official Bikram certification teacher training in Thailand.

“After achieving certification I was offered a teaching post at Namaha Bikram Yoga in India. It was the most amazing experience and a dive into the deep end for a new teacher.”

As well as being an instructor Sophie is a keen student and attends class daily.

“I feel that practicing daily definitely makes a difference to my teaching. When you connect to your body, really feeling the postures, listening to each instructor as if you’ve never practiced before – even though the sequence is the same, you can have a totally new experience every time. That’s the beauty and the brilliance of Bikram. There’s nothing like it.” 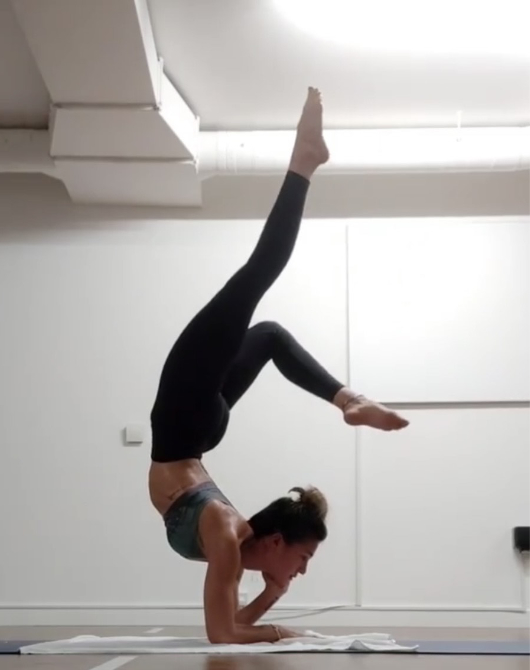 Leticia teaches Ashtanga-Vinyasa flow, Yin yoga and Rocket yoga. Her teaching is influenced by the styles she practices and her background as a musician and professional swimmer. She wanted to find that “something” which would provide the same level of strength, muscle tone and discipline, but also to be able to connect, bring light, to go deeper, peel some layers and move to heal. Leticia found Yoga to be genuinely life changing in terms of growth physically, mentally and spiritually, and since then it is her mission to help others through yoga and her life journey and experiences. Through intention, meditation, breath, asanas, movement and music, Leticia’s classes are suitable for all levels and designed to press pause in the daily rush and mental noise to focus on the Now, to create balance in mind, body and soul. 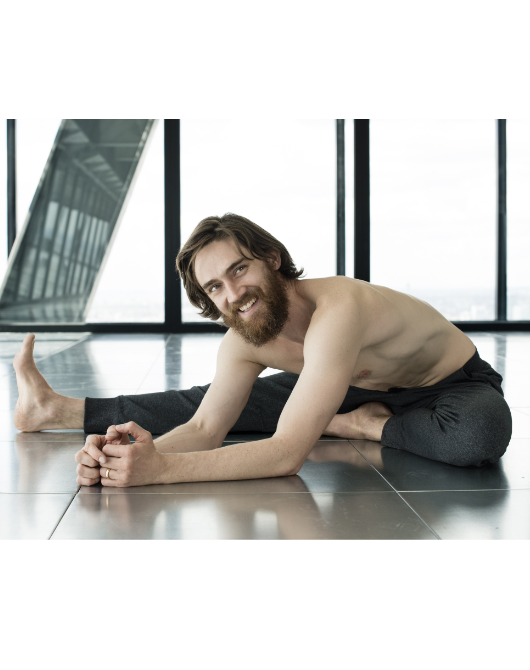 Michael’s been doing yoga longer and more consistently than pretty much anything else in his life. He recognises that yoga means a lot of different things to a lot of different people and that yoga postures are just the surface; they provide an entry point into something multi-dimensional, a living philosophy which is continuously adapting and evolving to the needs of the time.

He believes that the yoga tradition can provide important lessons which are relevant to our times, and at the same time grounds his teaching in a modern understanding of anatomy, physiology and the science of movement.

He first started practising yoga in 2001 and attended his first yoga teacher training in 2009. As well as hot yoga, he also teaches dynamic vinyasa, focusing on pranayama and alignment, with hands on adjustments. He also likes to spend much of his time upside down, and is happy to help anyone else who wants to spend their time that way too. Ultimately, he believes that yoga practice is for all, and he welcomes everyone to his class.

Michael is a Senior Yoga Teacher registered with Yoga Alliance.